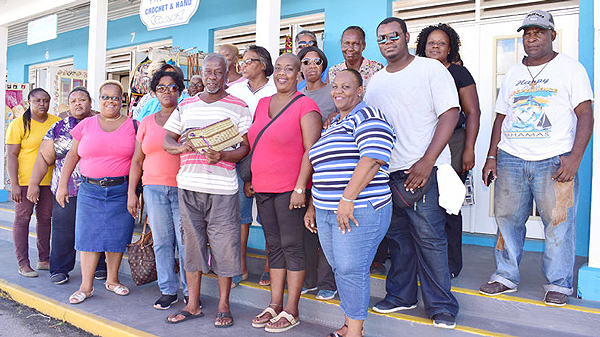 VENDORS UNITED – Vendors of the Port Lucaya Marketplace came together to vent their concerns after the beach access was closed, which they say is drastically affecting their already low income. (PHOTOS: JENNEVA RUSSELL)

Port Lucaya straw vendors, yesterday, raised concerns over tourists not being able to utilize the beach access near the Port Lucaya Police Station, because the opening’s gate was chained and locked.

McPhee noted that with vendors already struggling to make ends meet and in “dire need of help,” closing the access not only denies tourists the ability to swim and enjoy the beautiful sea, sand and sun, but it further dampens the business for vendors.

Claiming that she was not informed of the closure, McPhee said that she was surprised by the decision.  Read more >>
Posted by Anthony Derek Catalano at 6:11 AM