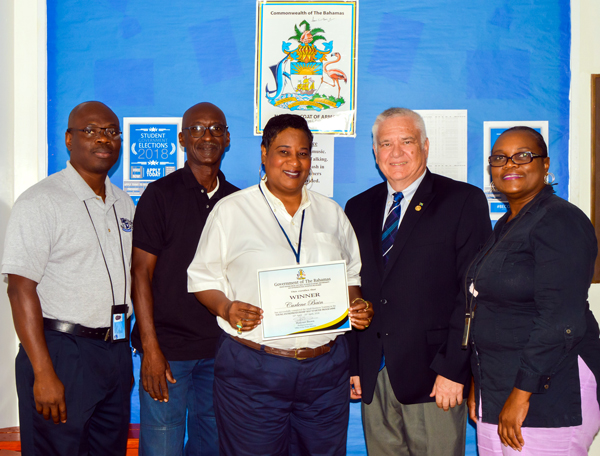 
A student of The Bahamas Technical and Vocational Education Training Institute (BTVI) in Grand Bahama is among 14 individuals awarded grants by the government for up to $5,000 to start businesses.

The self-starter grant winners have a wide variety of businesses including: photography, craft stores, bakeries, entertainment, education, event planning, clothing stores, tourism and transportation, and fishing.  The program empowers Bahamians 18 to 30 to establish small businesses, providing funding between $1,000 and $5,000 to acquire tools and supplies for their businesses.  Funds will be paid directly to the supplier.

“I feel legit. Someone finally recognized what I’m attempting to do. I no longer feel alone,” said Curlene who studies Electronics Engineering at BTVI.

The journey for Curlene began while in a BTVI Entrepreneurial Workforce Prep class in spring 2018.

As one of the requirements of the class was a business plan, Ms. Bain approached her instructor, Sherlock Prince, to help turn that class project into a submission for the government program.

“Mr. Prince wanted something real. It was not a half way plan. I’m impressed with that. I had the direction of Mr. Prince and could call on him. Even my Accounts instructor, Jacqueline Stubbs, helped me with the accounting details,” said Curlene who reportedly re-wrote the plan about 10 times over a three month period.

Grants were also awarded to existing small businesses wishing to expand.  The Grand Bahama Chamber of Commerce and the Grand Bahama Port Authority are partnering with the government in this venture.

Phase I of the self-starter program began with a short business readiness training course designed to expose budding entrepreneurs, as well as existing business owners to fundamental skills and tools in business management best practices – all aimed at preparing them for the running of successful business operations.

The second phase afforded each candidate the opportunity to compete with their business classmates for a chance to win an available business grant of up to $5,000 for start-up or expansion of their business idea.

Mr. Prince expressed pride in knowing his student was successful in the program.

“On the business plan, I did some coaching, shared some suggestions, but the idea is hers. It shows she would have learned something in the class. And she puts a lot of passion and precision in her work. The plan was well written,” he recounted.

Explaining the concept of FastCrafts Fast Ferry & Water Taxi Services, Curlene said it will be a day trip from Freeport to Abaco twice a week, in addition to tours of the waterfront real estate market, leaving at 8 am and returning by 8 pm.

“No one has ever attempted to leave Freeport to go to Abaco; you usually go from McLean’s Town to Abaco,” she stated.

Curlene has worked assiduously in to get her business up and running, reportedly having invested $6,000 of her own money, working a day with a local ferry company and travelling as far as Canada to visit a ferry and tour company.

“BTVI is generally trying to assist in class and outside of class. We found a student who is innovative and creative. We are fortunate to have good faculty who are practitioner scholars. This (win) is an example of putting theory into practice,” said Dr. Robertson.

“We are following one of the government’s mandates, trying to get our people to own a business and not just work for others.  Curlene is taking advantage of what we offer and intends to eventually employ BTVI students. It is a proud moment,” said Ms. Collie.

Phase III of the program will pair each grant winner with a seasoned business mentor, who will provide expert advice and guidance for their start-up or existing business venture over the course of the upcoming weeks.

Posted by Anthony Derek Catalano at 10:10 AM