Living Whale is Cut Open in Search for Ambergris 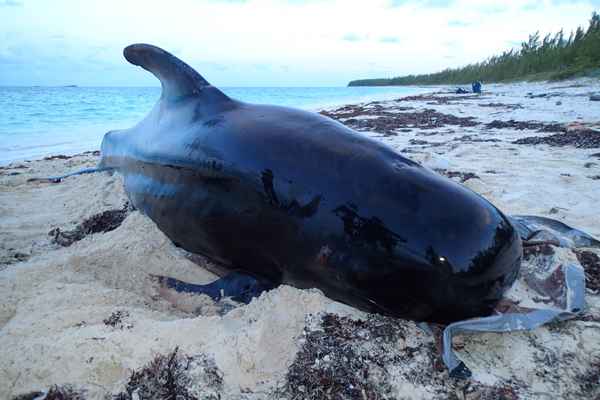 The Bahamas Marine Mammal Research Organisation (BMMRO) responded to the report of a live stranded pilot whale on August 23rd on the beach just north of Crossing Rocks, Abaco.

With the help of Crossing Rocks community members, BMMRO’s team was able to push the 11-foot young adult female whale back out to sea but had to hold it upright so that it did not drown. Two sharks patrolled nearby. During the rescue, BMMRO scientist Dr. Diane Claridge discovered a 3-foot long and 3-inch deep cut on the whale’s underside, deep enough to have cut into the muscle.

Claridge describes her response to the troubling discovery: “Sadly, this type of body mutilation has been observed previously in the Bahamas on a dead dolphin, but I never imagined anyone cutting into the body of a live animal. I was horrified.”

“There is absolutely no doubt that a knife was deliberately used to make this laceration. The cut was too straight to have been caused by rocks or coral, and the skin and blubber is not easily cut into, so it had to be done with some force. Additionally, the location of the cut on the whale’s underside indicated the person was looking for ambergris.”

“As well as completely lacking compassion, the perpetrator was obviously ignorant of both Bahamian law and how to find ambergris.”

It is against the law to harm marine mammals in any way in The Bahamas. Anyone with information regarding who conducted this despicable act should contact the Department of Marine Resources or Marsh Harbour Police immediately.

Ambergris is a substance that sperm whales produce in the stomach to help digest and pass squid beaks. Only sperm whales produce ambergris and not all sperm whales, and no dolphins or any other whale species. Sperm whales defecate the ambergris with the encased squid beaks (occasionally it is vomited instead) and the ambergris floats at sea until is it washed ashore. During its time at sea and on the shore, its chemical properties change due to oxidation. Ambergris is highly valued for its use in the perfume industry, but only after it has oxidised. Ambergris in the stomach or intestines of a dead sperm whale is worth absolutely nothing (and smells awful). Furthermore, a whale’s stomach is not located on its underside but under the ribcage. Mutilating a whale or dolphin is not going to result in finding ambergris of any value but could result in a $5,000 - $25,000 fine and/or up to 18 months in prison.

The appropriate response when someone discovers a stranded dolphin or whale whether alive or dead is to immediately call the Bahamas Marine Mammal Stranding Network (242 366-4155) to initiate the stranding response team. This network consists of 130 members located throughout The Bahamas. Assisting a living whale or dolphin should be done with caution (because they are large animals and may transfer diseases) but helping the animal to breathe and keeping it wet until experts arrive will sometimes save its life.

Despite our efforts to save the pilot whale, she died the following morning. BMMRO conducted a necropsy (an animal autopsy) and samples were collected to determine the initial cause of stranding.

BMMRO scientist, Dr Charlotte Dunn noted: “During the 2-day event more than 20 people from Crossing Rocks, including children, assisted us, doing what they could to try to save this animal. This community support and kindness was uplifting and a great help.”

BMMRO wishes to thank all those individuals from the Crossing Rocks community who came out to help, especially Marcus, Tony, CJ, DeShawn and Antoine; Olivia, Cha, and Dr Bailey from Marsh Harbour, and our interns Ashley and Krystynia.


The Bahamas Marine Mammal Research Organisation (BMMRO) is a non-profit group based in Sandy Point, Abaco whose mission is to promote the conservation of marine mammals through scientific research and educational outreach. To learn more about BMMRO’s research and its outreach programmes, see the following links: www.bahamaswhales.org, and www.facebook.com/bmmro.

Link to the Bahamas Marine Mammal Protection Act
Posted by Anthony Derek Catalano at 5:15 AM