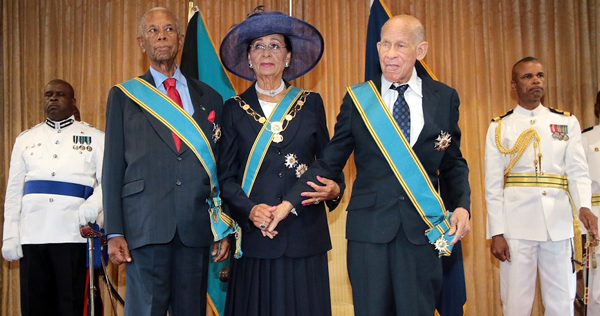 Governor General Her Excellency Dame Marguerite Pindling (centre left) was invested today as Chancellor of the Societies of Honour at Government House. Pictured from left: Prime Minister, Dr. the Hon. Hubert Minnis, HE The Most Honourable Dame Marguerite Pindling, Acting Chief Justice of the Supreme Court Vera Watkins, and Leader of the Opposition the Hon. Philip Davis.
BIS Photos/Derek Smith

Two of the country’s “finest sons” were bestowed the ‘Order of the Nation’ for their contributions to the development of The Bahamas.  The honour was bestowed upon former Governors-General Sir Orville A. Turnquest and the Hon. Arthur D. Hanna before family and officials, during an 11:00 a.m. Investiture Ceremony in the Ballroom of Government House, Mt. Fitzwilliam, on Thursday, August 23, 2018.

Governor General, Her Excellency, the Most Honourable Dame Marguerite Pindling, who became Chancellor of the Societies of Honour as established under the National Honours Act 2015 in a ceremony earlier that morning, pinned the incoming Members of the O.N.

Both men became the first to be honoured following the introduction of indigenous national honours; hence the letters after their names would be:  The Most Honourable Sir Orville Turnquest, O.N., G.C.M.G and The Most Honourable Arthur Hanna, O.N.  Read on >>
Posted by Anthony Derek Catalano at 2:36 PM