Bahamas and US sign amendment to narcotics control agreement 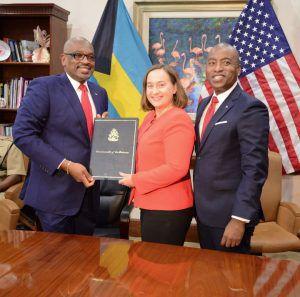 NASSAU, Bahamas, Aug. 9, CMC – The Bahamas and the United States have pledged to continue joint efforts in the fight against corruption at all levels with the signing of an amendment on Narcotics Control and Law Enforcement between both governments.

The Eighth Amendment to the Letter of Agreement on Narcotics Control and Law Enforcement was signed Wednesday during a ceremony at the Office of the Prime Minister.

Under this most recent Amendment, the United States will provide over US$1.4 million for law enforcement professionalization support, rule of law, transparency and anti-corruption reform in The Bahamas.  Read more >>
Posted by Derek Catalano at 9:24 AM