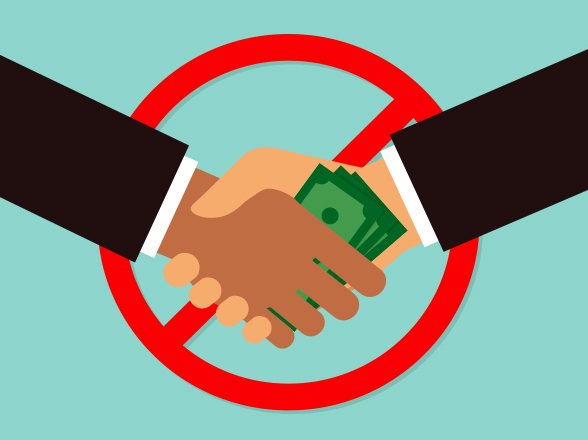 Corruption is a complex phenomenon. Its roots lie deep in bureaucratic and political institutions, and its effect on development varies with country conditions. But while costs may vary and systemic corruption may coexist with strong economic performance, experience suggests that corruption is bad for development.

Bribes are one of the main tools of corruption. They can be used by private parties to "buy" many things provided by central or local governments, or officials may seek bribes in supplying those things.

Government contracts - Bribes can influence the government's choice of firms to supply goods, services, and works, as well as the terms of their contracts. Firms may bribe to win a contract or to ensure that contractual breaches are tolerated.

Lower taxes - Bribes can be used to reduce the amount of taxes or other fees collected by the government from private parties. Such bribes may be proposed by the tax collector or the taxpayer. In many countries the tax bill is negotiable.

Licenses - Bribes may be demanded or offered for the issuance of a license that conveys an exclusive right, such as a land development concession or the exploitation of a natural resource. Sometimes politicians and bureaucrats deliberately put in place policies that create control rights which they profit from by selling.

Time - Bribes may be offered to speed up the government's granting of permission to carry out legal activities, such as company registration or construction permits. Bribes can also be extorted by the threat of inaction or delay.

Legal outcomes - Bribes can change the outcome of the legal process as it applies to private parties, by inducing the government either to ignore illegal activities (such as drug dealing or pollution) or to favor one party over another in court cases or other legal proceedings.  Read more >>
Posted by Derek Catalano at 10:47 AM