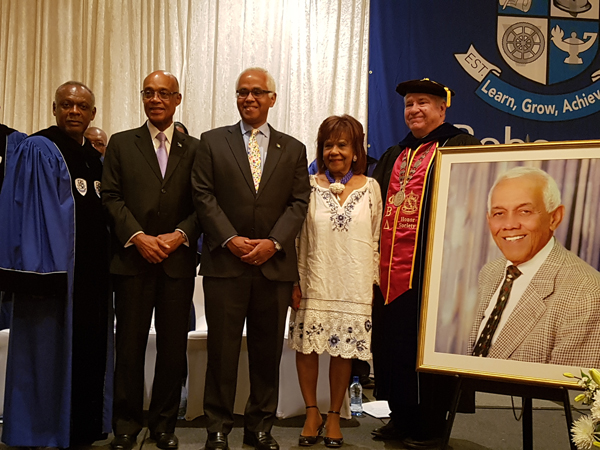 The Bahamas Technical and Vocational Institute (BTVI) has received the single largest private donation in its history through the establishment of the Vincent D’Aguilar Memorial Scholarship.

The late Mr. D’Aguilar’s wife, F. Marina D’Aguilar made the presentation along with her sons, Minister of Tourism, the Honourable, Dionisio D’Aguilar and Dayne, with their respective wives, Saskia and Linda at BTVI’s recent graduation exercise.  The class of 2018 had 250 graduates.

Mr. D’Aguilar was a respected businessman, electrical engineer and philanthropist.  His family’s generous donation to BTVI is valued at $150,000 for its first three years and will provide funding for 15 to 20 students annually with significant financial aid for tuition and books in numerous areas of study.  Recipients will be considered on the basis of need and merit in all age groups.

“The family is delighted to be supporting programs where Bahamians can learn important skills so they can compete in the local market for steady and well-paying jobs.  The courses taught at BTVI not only build solid careers, they help build the nation, and that's why we decided to financially support this fine institution," said Ms. D’Aguilar in a statement following the graduation.

Speaking on behalf of the family during the graduation ceremony, Minister D’Aguilar expressed pride in the contribution of his father to the nation, noting that the elder D’Aguilar had respect for those who chose to learn a trade.

“He had a deep conviction that education in any trade can put a man or woman on the road to financial independence. The courses of study offered at BTVI will prepare many young persons for a lifetime of honest opportunities in The Bahamas,” said Minister D’Aguilar.

He added that his family is looking forward to a “long, productive philanthropic relationship with BTVI” and challenged other organizations to help make higher education accessible to all.

“BTVI’s future is very bright. This donation would undoubtedly help us to live our mission: ‘To provide learning opportunities that enable individuals to be globally competitive and economically independent.’ We look forward to additional support from the private and corporate sectors as we seek to bridge the skills gap and build the Bahamian economy,” said Dr. Robertson.

The institution’s chairman, Kevin Basden lauded Mr. D’Aguilar as one of the pioneers of engineering and technical training in the country.

“He was a man who was not only strong technically, but also one with integrity and high ethical standards,” said Mr. Basden.

Mr. Basden added that what BTVI offers provide the requisite technical and vocational skills, which allow students to participate in the knowledge based economy of today.

“These skills are a critical link to the country’s growth. We also believe that by making persons more employable and increasing their self-worth, crime can be reduced. You are the bedrock of the workforce,” he stated during the ceremony held at the Meliá Nassau Resort.

Additionally, Minister of Education, the Honourable Jeffrey Lloyd noted that the thrust of any society is the advancement of technical and vocational education and training.

“No society on earth has ever functioned to its maximum potential unless it can fix and create its own thing. When you defer it to another, you become enslaved to another,” said Minister Lloyd.

The minister underscored the importance of addressing the national skills deficit, adding that this is why it is absolutely critical that BTVI meets this important segment of our society.

Minister Lloyd went on to note that investing in technical vocational skills is a “low hanging fruit.”
Echoing this message was guest speaker and General Manager of Sol Petroleum Bahamas, Keith Glinton.

“There is still more demand for the trades than people to fill those demands. That is why support for TVET is growing. You saw it today with the $50,000,” he said.

Mr. Glinton, who spoke highly of BTVI, revealed that his wife studied carpentry at BTVI and is now the owner of Custom Creations 242, while his son, who studied Auto Mechanics, works as an Automotive Engineer at a local insurance company.

“Some of you in the construction trades will work on construction projects in hotels in other countries …your time at BTVI has set you up for progress. My family is proof. You have left this place prepared to not just talk, but do. BTVI has set you on the road to a better future,” said Mr. Glinton.

The full criteria for students who wish to apply for the Vincent D'Aguilar Memorial Scholarship is available from BTVI’s Office of Fund Development.  Scholarship applications for fall 2018 are now available at the Admissions office.

Posted by Anthony Derek Catalano at 6:55 AM