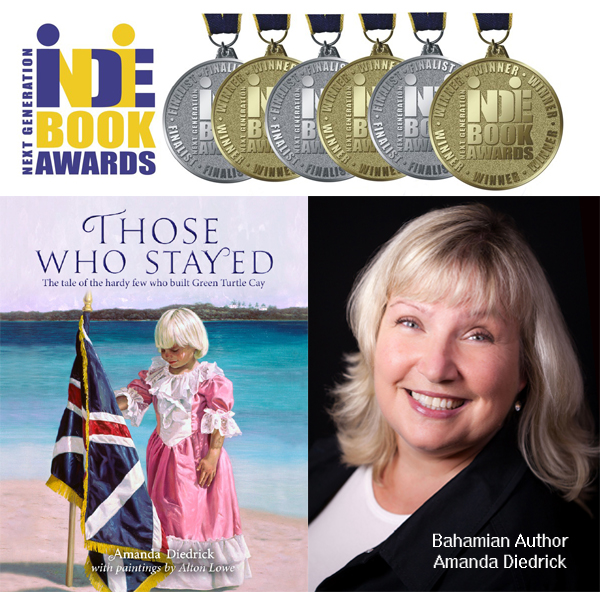 Green Turtle Cay, Abaco, Bahamas (May 23, 2018) – Bahamian author Amanda Diedrick has been named a finalist in the 2018 Next Generation Indie Book Awards (Regional Non-Fiction category) for her book, Those Who Stayed: The Tale of the Hardy Few Who Built Green Turtle Cay.

Presented by the Independent Book Publishing Professionals Group, the Next Generation Indie Book Awards (NGIBA) program recognizes and honours excellence in independent publishing. Each year, the program awards more than 60 monetary prizes and trophies to independent authors and publishers worldwide.


“Among independent writers, the NGIBAs are held in extremely high regard, so I’m thrilled to be named a finalist,” said Ms. Diedrick. “To be recognized as one of the top five independent authors in my category around the world is a huge honour.”

A writer for nearly three decades, Ms. Diedrick’s work has appeared in Canadian, American and Bahamian publications, the latter including Abaco Life, the Abaconian and the Nassau Tribune. She has written extensively about various aspects of Bahamian life, including the plight of the Bahamian Queen Conch, challenges faced by Bahamian families with disabled children, the Bahamas Special Olympics organization, Bahamian genealogy and traditional island cuisine and culture.

On her weblog, LittleHousebytheFerry.com, Ms. Diedrick documents the ongoing restoration of her ancestral home on Green Turtle Cay – a project she and her husband, Canadian journalist Tom Walters, began in 2014.

For more information or to order online, visit www.ThoseWhoStayed.com.

The 2018 New Generation Indie Book Awards will be presented June 22 at a gala event in New Orleans.  To learn more, visit www.indiebookawards.com.
Posted by Anthony Derek Catalano at 1:09 PM