Keandra Knowles - From a BTVI Blue Knight to a Holland Hurricane.

“As individuals, we tend to place limitations upon ourselves regarding dreams and ambition, which is a self-imposing threat to our own success. Nothing is impossible once you believe you can. As Nike says, ‘Just do it.’”

These were the encouraging words of Keandra Knowles - a student at the Bahamas Technical and Vocational Institute (BTVI), who recently received the opportunity of a lifetime when she participated in a student exchange program at Holland College, Prince Edward Island.

Born and raised in Freeport, Grand Bahama, Keandra never imagined she would enroll at BTVI and end up in Canada for school. She was chosen as the recipient of an Emerging Leaders in the Americas Program (ELAP) scholarship and became the first student from BTVI’s Grand Bahama campus to be awarded this opportunity.

The scholarship, granted by the Canadian government, provides Latin America and Caribbean students with short-term exchange opportunities at the undergraduate and graduate levels.

Keandra, a Construction Technology major, accepted this opportunity with open arms and high spirits. From the moment she found out, she promised herself that she would make the most out of her experience. Reality however did not set in until the moment she stepped off the plane into a world unlike the one she knew. Her adventure had begun.

Holland College was far different from the BTVI Keandra knew. From the campus and the classes to the teaching methods and the extracurricular activities, Keandra knew she was not in ‘Kansas’ anymore. Fortunately, she knew that her year-long journey at BTVI had prepared her for this moment.
“The courses were structured differently because where I would have taken more of a hands on approach regarding the building process at BTVI, I was challenged to look into the engineering design factors as well as the legal and administrative framework of the construction industry at Holland College. Although there were some differences, I was able to adapt fairly well because I was familiar with much of the content as a result of the knowledge I acquired from BTVI combined with that from past experiences,” said Keandra. 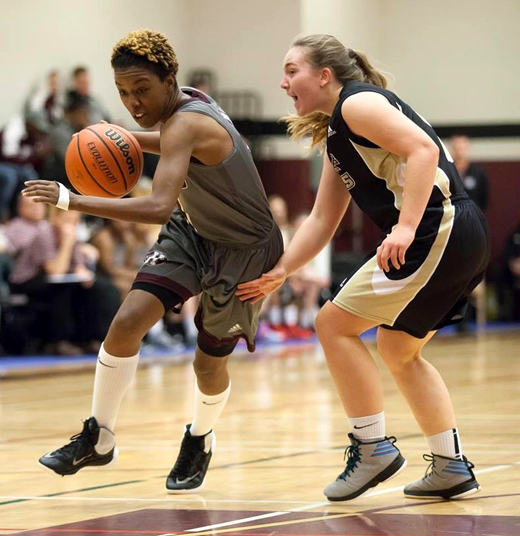 Playing the game well and shooting for the stars!
Keandra representing Holland College in a basketball game.

Additionally, while studying at Holland College, Keandra not only focused and thrived academically, but she also ventured out into extracurricular activities by joining the women’s basketball team. Being a part of the team allowed her to explore other provinces such as Québec, Nova Scotia and New Brunswick, which she claimed was the most exciting aspect of her experience.

By making the decision to attend BTVI, Keandra set herself up to discover life-changing possibilities. This opportunity has further fueled Keandra’s determination to succeed and makes her want to work harder. It has widened her perception of education.

“This experience has reinforced the idea that education is dynamic, multi-dimensional and not restricted to formal settings such as within academic institutions,” said Keandra.

“I am more enthused to continue learning about the people whom I meet as well as the environment of which I am engaged in and all that it encompasses. As a result, I expect exposure to new ideas, different technologies and methodologies to inspire myself and others to bring about a positive change within our respective environments. The saying goes, "Knowledge is power," yet I believe that knowledge is powerful when applied, and as such it is a key to unlocking growth that can lead to change,” she continued. Keandra among her new classmates, surveying land in Canada.

Keandra is grateful to BTVI not only for helping provide this opportunity, but for efficiently equipping her with the skills and knowledge that made it easy for her to adjust to her three month semester at Holland College – a school that has now been added to her list of further possibilities.

Meanwhile, Associate Vice President of BTVI's northern campus, Veronica Collie, said the team is pleased to have had its first ELAP student.

"During Keandra's period at BTVI Freeport, she promoted positive campus growth. BTVI Freeport is grateful to her for representing us," said Ms. Collie.

"When she was chosen, we were all elated, particularly since she was the first ELAP student from the BTVI Freeport campus.  It was felt that Keandra would continue to excel at Holland College and bring back a wealth of ideas. This, we have already seen," exclaimed Ms. Collie.

Ms. Collie believes Keandra has "set the pace" for other students from the Grand Bahama campus to be afforded the opportunity to study abroad.

Posted by Anthony Derek Catalano at 4:42 AM