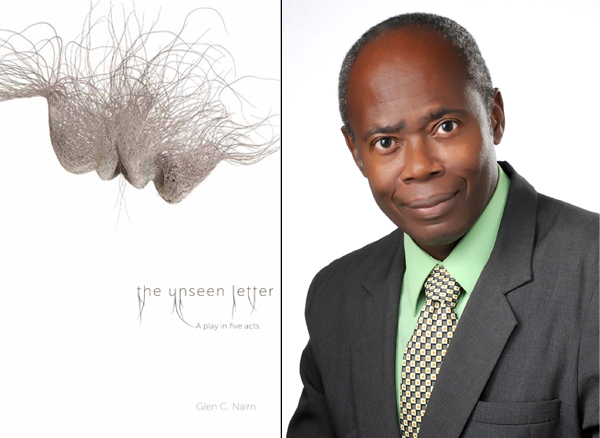 The Unseen Letter – A Play in Five Acts by Glen C. Nairn.

With issues of love and desire at play, “Nairn presents change as a ritual of nature, sometimes in unseen and mysterious ways,” which draws in the readers, said Vladimir Lucien, actor, critic, and BOCAS award-winning poet from St. Lucia.

“Hot off the press, The Unseen Letter also received an ‘SPD recommends’ boost from the California-based SPDbooks distributors as a ‘new drama’ title,” said Sekou.

The Unseen Letter is set in a country of islands, center stage is a showdown over sovereign symbols of national and cultural identity, said Sekou. Everyday folks, a larger-than-life hero, a politically-insinuated murder, a mysterious cat called Trumpet, love rivalries, and business interests all compete intensely in Nairn’s debut drama.

What is also evident is how the “traditional play format is invested with elements of scriptwriting, suggesting an experimentation, plotting a path beyond the stage” by the playwright, said the publisher of the 242-page book.

The Unseen Letter is available at Nassau Stationers on Rosetta Street, Nassau, Bahamas; at Amazon.com and SPDbooks.org (https://goo.gl/WWEzeC). The new title is HNP’s seventh book published by mid-2017.

According to HNP, Glen C. Nairn was born in New Providence, The Bahamas in 1960. He received his BA in English from the University of Windsor, Canada in 1986.

From 2006 to 2009, Nairn was a copy editor and columnist for The Nassau Guardian, a daily newspaper in New Providence. His column focused on social and cultural issues, said Sekou.

The Bahamas’ newest author, Glen C. Nairn, is also a recipient of the James Michener Scholarship from the Caribbean Writers Summer Institute, University of Miami, and a creative writing certificate from the Paris American Academy, France.

The Unseen Letter – A Play in Five Acts was the featured book at the opening ceremony of the 15th annual St. Martin Book Fair, June 1, 2017.
Posted by Anthony Derek Catalano at 4:38 AM