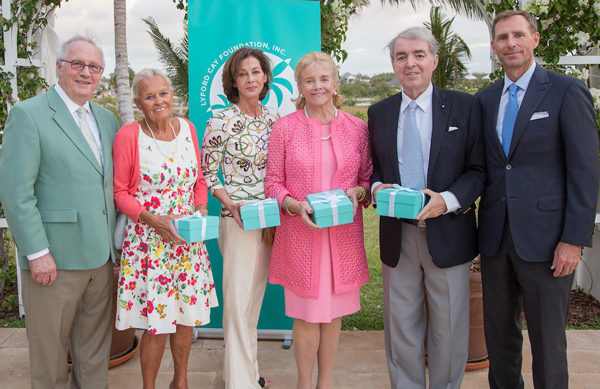 Honourees Have Each Given More than 20 Years of Service

Their work has been critical to ensuring that nearly $50 million has been invested in the Bahamian people and The Bahamas over the past 48 years.

Here are just a few ways that the four honourees have impacted the country through their support of the Foundations:

Mr. Frank Crothers
Mr. Frank Crothers has happily called The Bahamas his home for almost 60 years. He often shares that out of all the places he has lived, The Bahamas is the best. Mr. Crothers joined the board in 1996. As a director for both Lyford Cay Foundation and The Canadian Lyford Cay Foundation, he has been able to demonstrate his passion for making an impact in the lives of Bahamians. He has served on numerous committees and was the first donor to the Foundations’ FOCUS programme before it even launched. Mr. Crothers is known for always inquiring about the well-being of the Scholars and is widely known in the community for his enthusiasm for the Foundations.

Mrs. Nancy Kelly
At 10 years old, Mrs. Nancy Kelly began a life of service as a hospital volunteer. When she married and moved to The Bahamas, her commitment to service remained the same. Mrs. Kelly joined the Lyford Cay Foundation board in 1996, and immediately sought ways that she could make a difference. She played a critical role in leading the board in raising $5 million for the Harry C. Moore Library at the then College of The Bahamas. Today, she is widely known as a champion of the FOCUS programme. Mrs. Kelly is motivated by the belief that education is the key to life.

Mrs. Catharina Birchall
The personal mantra that a good education is essential for life in a complex world has guided Mrs. Catharina Birchall over the years. Mrs. Birchall joined the board of The Canadian Lyford Cay Foundations in 1994. She fondly recalls that her involvement with the Foundations was her way of being a part of developing a country that she loves. In the early years as a director, Mrs. Birchall played a key role by going into the community and becoming familiar with the needs in public schools. Mrs. Birchall and her family have further illustrated their commitment to The Bahamas by establishing an endowed scholarship and through a recent substantial donation to the FOCUS programme in memory of late chairman Mr. Manuel Cutillas.

Mrs. Loretta Rogers
Mrs. Loretta Roger’s fondness for The Bahamas goes back to her childhood when she first came to visit. For Mrs. Rogers and her family, philanthropy is a way of life. She became a board director and president of The Canadian Lyford Fay Foundation in 1981. Her best memories of the organisation included serving on the committee that selected Scholarship recipients and spending quality time meeting Scholars. Rooted in a passion for providing opportunities for those who cannot afford it, the Rogers family is one of the Foundations’ most generous donors and has made the largest single donation to any purpose, in the organisation’s history.

“At the Foundations, we are committed to the vision of every Bahamian being empowered to reach his or her full potential. We are grateful to have the enduring leadership of board directors who have each made this transformative work their life vision as well,” noted Maureen French, Managing Director of The Lyford Cay Foundation.
Posted by Anthony Derek Catalano at 5:43 AM