‘Age aine nothin’ but a number’ 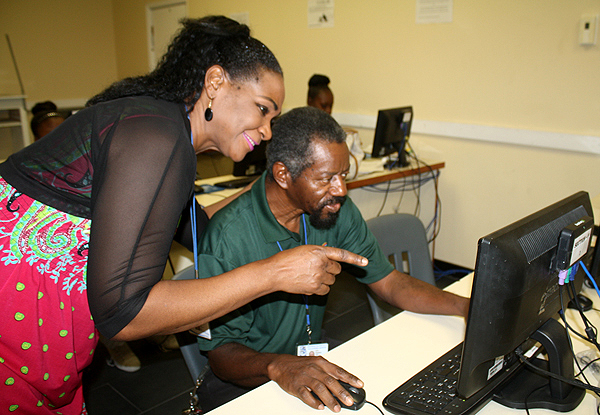 Patricia, 54 and Errol, 62, have been married 34 years and are both enrolled in BTVI.
(Photo: Shantique Longley)

Imagine being 62 and returning to the classroom for the first time since graduating high school.  Errol Haughton has done just that, proving that you are never too old to learn. But what’s more is that his 54-year-old wife has joined him in his quest for further education.

Married for 34 years, Errol and Patricia Haughton are both unemployed.  They are veteran hoteliers, having worked in the industry from back in the days when the Emerald Beach Hotel existed, before being destroyed by fire. The pair never got the chance to retire, as they both were laid off from Baha Mar.

Instead of bemoaning their status, the Haughtons decided to reinvent themselves by first furthering their education at The Bahamas Technical and Vocational Institute (BTVI). Errol is studying towards a certificate in Heating Ventilation and Air Conditioning (HVAC), while Patricia is studying in the Office Assistant program.

The parents of two children and five grandchildren are taking English and Math. And while Errol is enrolled in Introduction to Computers, his wife is in a Microcomputer Applications class.

“My neighbor informed me I could go to BTVI. I said, ‘You sure? They only accept young people,’” recalled Patricia, who received a 3.57 grade point average (GPA) in her first semester back in fall 2016.

Now in her second semester, Patricia continues to excel, while assisting her husband to do the same.
Errol admitted being in the classroom is challenging.

“I haven’t been in the classroom since high school, having to write all these essays. I like to read, but I don’t like to write. And some of the Math is new to me, but I’m hanging in there, trying my best,” said the soft-spoken Errol.

“I even do better than some of the young people, possibly because of my focus,” he added.
Questioned as to whether they intentionally got two of the same classes that are in the same sections, the answer was practical.

“There is only one vehicle and by doing so, we cut down on gas. We are also able to help each other with the work,” said Patricia.

Errol quickly chimed in, “She is better at Math than I am.” 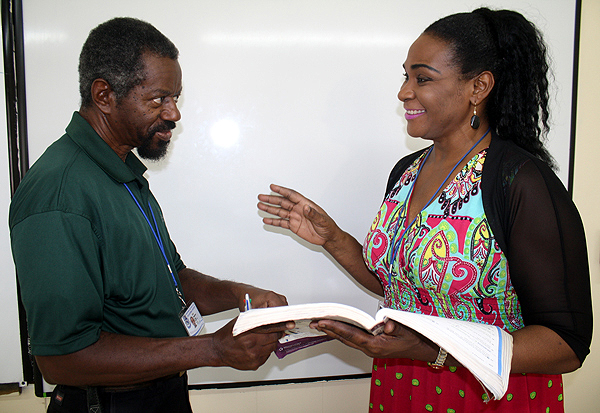 Errol Haughton (l), who is studying Heating Ventilation and Air Conditioning (HVAC) at BTVI, listens attentively to his wife, Patricia, who is studying Office Assistant. The mature couple has been married 34 years and is unemployed. (Photo: Shantique Longley)

Reflecting on the time spent thus far at BTVI, Patricia encouraged the younger generation to pursue their goals.

“I thank God for the mindset that he has given me to return to the classroom in order to achieve my academic endeavours. No matter how old you are, follow your dreams.  The instructors at BTVI have a plethora of knowledge. They respect us and help us, as they would all the others. I would recommend anyone to come to BTVI,” said Patricia, who has been busy practicing for her Microcomputer Applications exam.

Errol agreed, stating the importance of never giving up.
“I like the fact that BTVI give people at our age an opportunity.  Age aine nothin’ but a number.  You’re never too old to learn,” he said.

Posted by Anthony Derek Catalano at 8:27 AM