BTVI Graduates Reminded of Their Value to Workforce 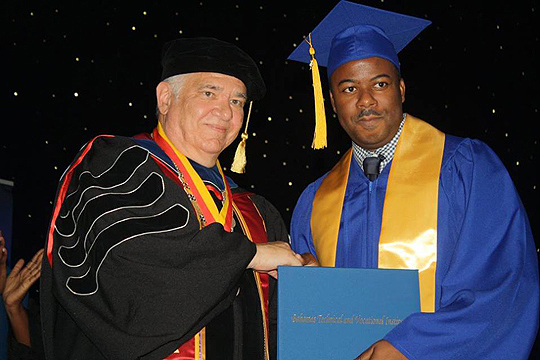 Four of BTVI’s very own employees recently graduated from the institution, including a member of the Finance department, Leonardo Davis, who is shown here with President, Robert W. Robertson. (Photos by Shantique Longley)

“BTVI is not a dumping ground for low-achieving students or those who are not college material,” emphasized the first president of The Bahamas Technical and Vocational Institution (BTVI), Dr. Robert W. Robertson during its recent commencement exercise.


Dr. Robertson underscored that people who have a vocation should not be frowned upon, because the world needs them and their place in society is crucial. Furthermore, he acknowledged to the students that the quest to remove the stigma associated with technical and vocational education is gradual, but coming along with the help of international organizations like J P Morgan.


Earlier this year, the banking giant announced its commitment of $75 million to career technical education programs.


Dr. Robertson further stressed that it is career and technical education that is a catalyst for Science, Technology, Engineering and Math (STEM) education. “Hence, one should not consider vocational learning as a last resort for those who have failed academically. It is quite challenging,” he said.


Throughout his speech, Dr. Robertson, suppressed the conventional depiction of BTVI being a dumping ground for inferiors, instead, providing several examples of how the institution has been the foundation of many success stories.


Additionally, the president applauded the students for making an investment in themselves and reminded them that their freshly tailored talents should not be ripped at the seams by the hands of triviality. He highlighted the importance of their skills to the workforce.


“In the hospitality industry, what would we do without construction workers to help build bed and breakfasts, motels, and resorts? And which organization does not have office assistants or administrators? Furthermore, in hotels, you can find Massage therapists, Estheticians, Barbers, Nail Technicians, Cosmetologists and more. These are just some of the disciplines we provide training for at BTVI,” he stated.


The president concluded by encouraging the class to stay “abreast of the latest in (their) respective industries,” not allowing graduation to be the endpoint of their success. He further inspired them to help others, give back, and pointed out that with their newly obtained degrees, certificates, and honors comes great responsibility.


Guest speaker, Gowon Bowe, Partner at PricewaterhouseCoopers and Chairman of The Bahamas Chamber of Commerce and Employers’ Confederation, reiterated the pre-established notions. He noted that “We live in an often polarized society. However, we must start cultivating a society of bold citizens, who are willing to participate in changing the course of the country.”


Mr. Bowe created his own acronym for BTVI, stating that it should be considered for: Boldness, Talents, Visionary, and Innovation.


He urged the students to become the movers and shakers of their country and begin to break the barrier of reticence in which they have been pushed under. He charged them to annihilate mediocrity as their contributions to the nation can be tremendous.


Mr. Bowe continued with advice regarding customer care and experience, adding that the smallest things make the biggest difference.


“The mechanic that cleans the car before returning it, the electrician that carries all of the debris and old parts as he departs and leaves the environment as if he has never been there….the service provider that knows your name and what your preferences are even before you ask,” he stated.


Also addressing the students was Under Secretary of the Ministry of Education, Angela Pratt-Rolle, who spoke highly of the graduates and the institution.


“BTVI exposes students to the innovative, rapidly evolving field of technical education, enabling them to be globally competitive and economically independent. So, there is no doubt that the graduates seated here have received a quality education and have been equipped with the adequate skills to join a 21st century, globally competitive workforce,” she said.
Ms. Rolle praised the institution for catering to the whole person and the extensive work it has done holistically and throughout the community.


The speaker also assured the graduates that they are needed for the development of their country stating, “Some of you have learned how to install air conditioners in homes or manage the technology in an office to turn the most ordinary hair and nails into a work of art. No matter what you have learned during your time here, I can say that all of you are graduating today not just with a great education, but with the skills that will let you start your careers and skills that will make a more modern and prosperous Bahamas.”


Mrs. Rolle insisted that the graduates grasp every opportunity presented to them. She reminded them that their country anticipates their skills, talents and innovative natures and that they remember that those assets were not nurtured by themselves, but with the investment of somebody somewhere.


Near the end of the ceremony, exuberant shouts impaled the air when students were instructed to switch their tassels to the opposite side, signifying they were graduates. The group of 200 graduates marched out, armed with the sharpness of their skills, ready to display their cutting edge talents to the working world. 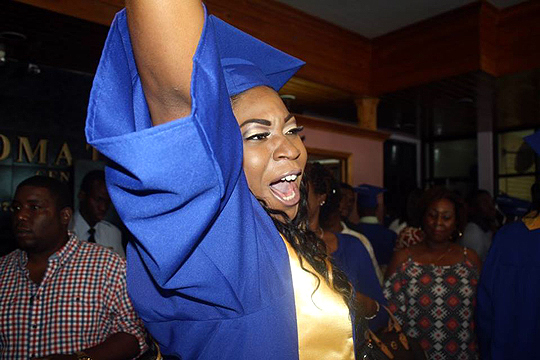 Hellisha Demeritte celebrates her achievement with shouts of joy. 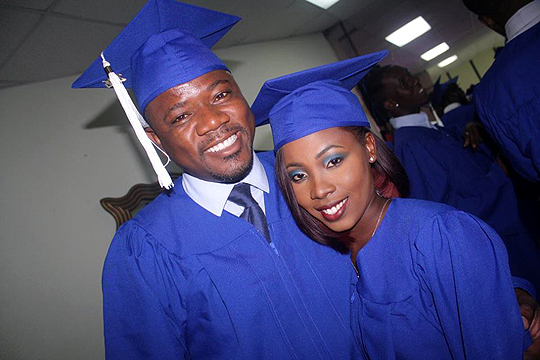 Graduates are all smiles in their caps and gowns. 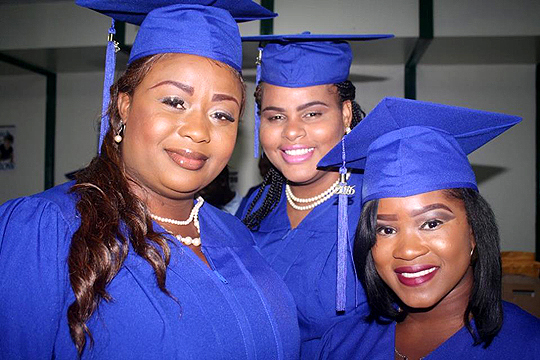 This trio awaits the start of BTVI’s commencement exercise 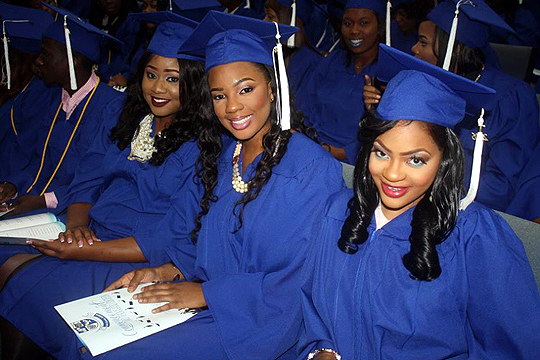 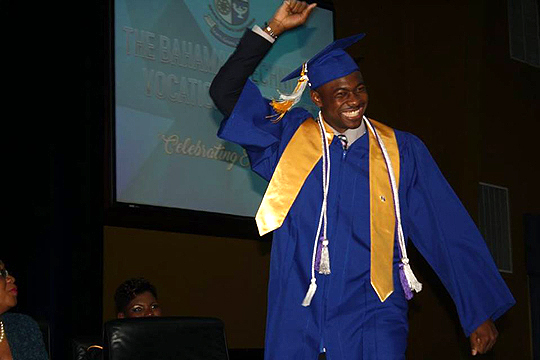 Bercario Bodie raises his fist in triumph as he walks across the stage at BTVI’s 2016 commencement exercise.
Posted by Anthony Derek Catalano at 3:56 PM