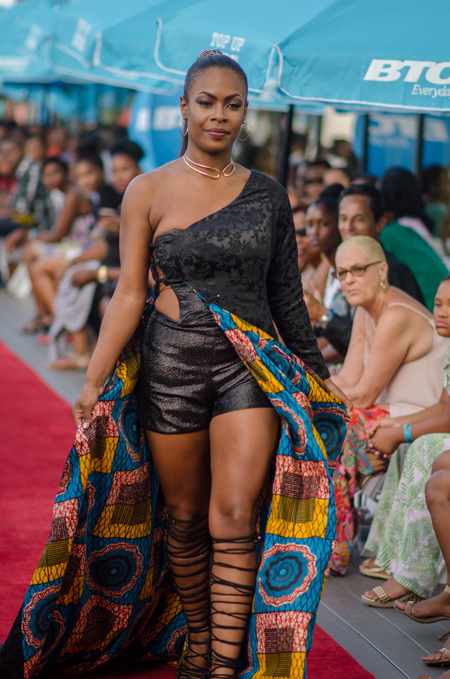 This was the winning piece modeled at the 2016 Miss Bahamas Designer Showcase competition. The garment was designed by BTVI graduate Mrylande Julien and modeled by contestant, Miss World Paradise Island, Pischia Adderley. 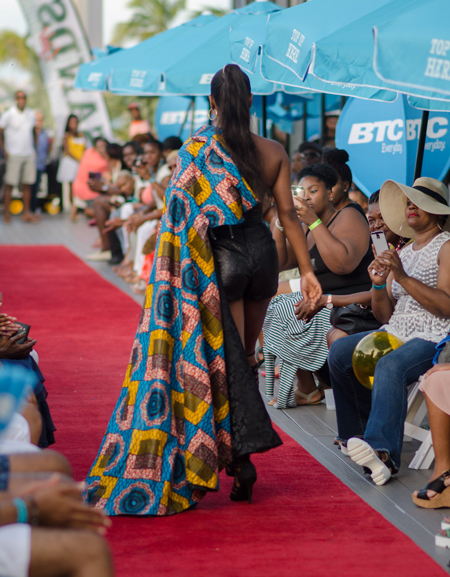 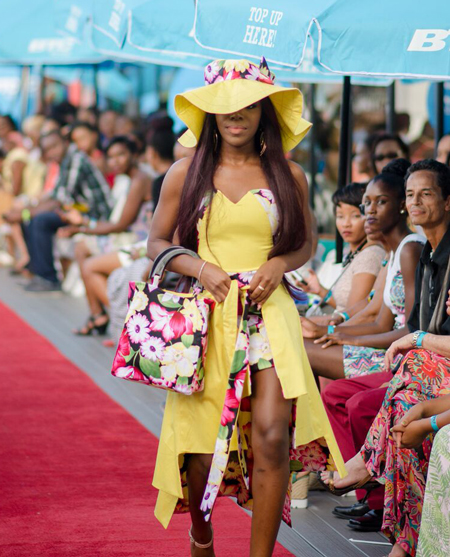 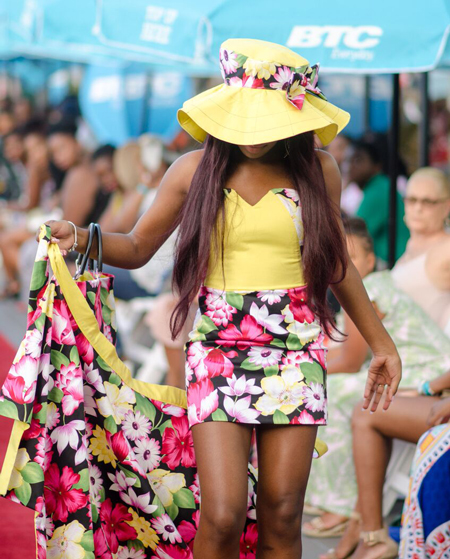 Flowers were in bloom for contestant Miss World Bimini, Bryneeah Gray. The creation was designed by BTVI student Janet Cooper! 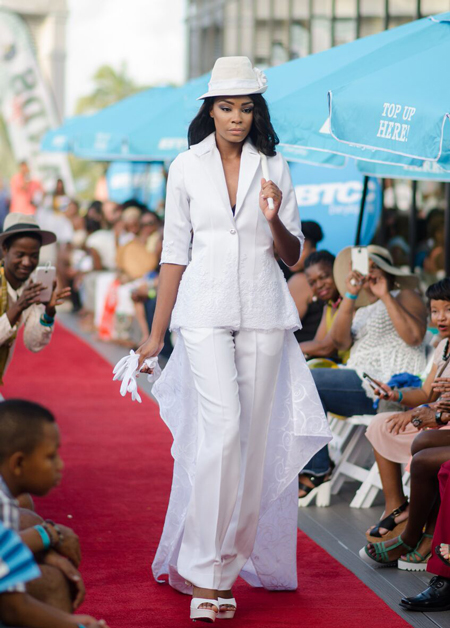 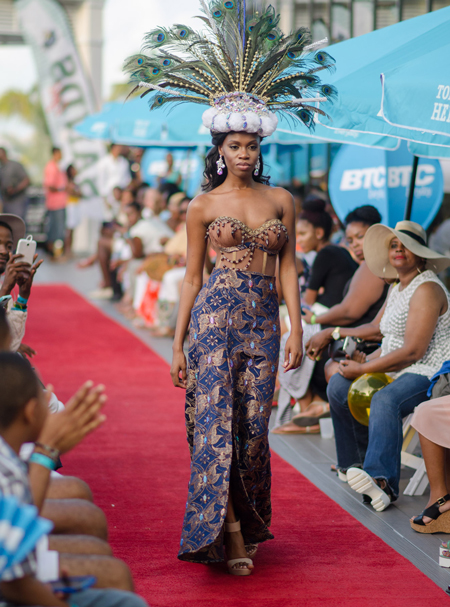 Fierce and Feathery! This look at the 2016 Miss Bahamas Designer Showcase competition is the creation of Trineil Hanna, a BTVI graduate. His design was modeled by Miss World Staniel Cay, Shanice Burrows. 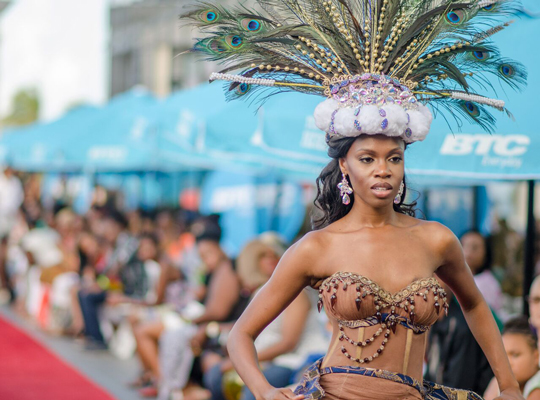 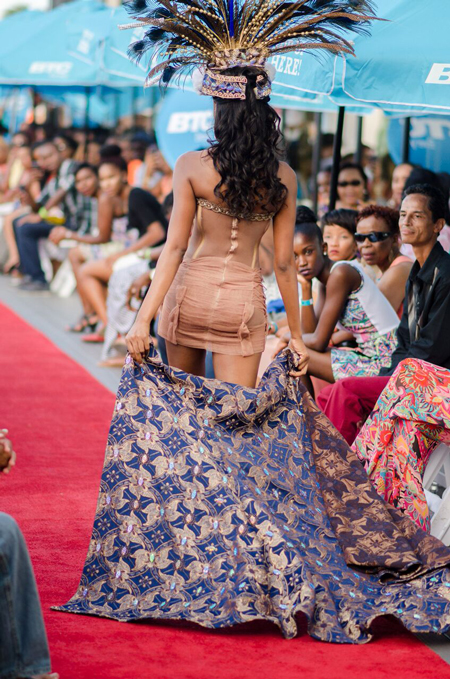 BTVI’s fashion students and alumni pulled out all the stops when they designed evening wear for contestants of the Miss Bahamas beauty pageant.  Miss World Staniel Cay, Shanice Burrows, is shown here in a design by Trineil Hanna. 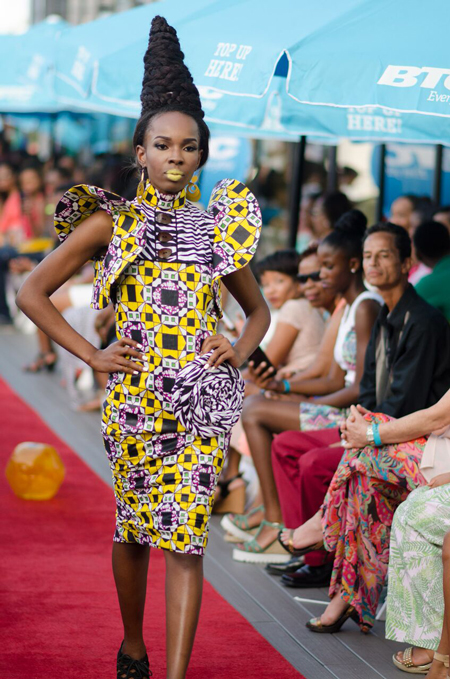 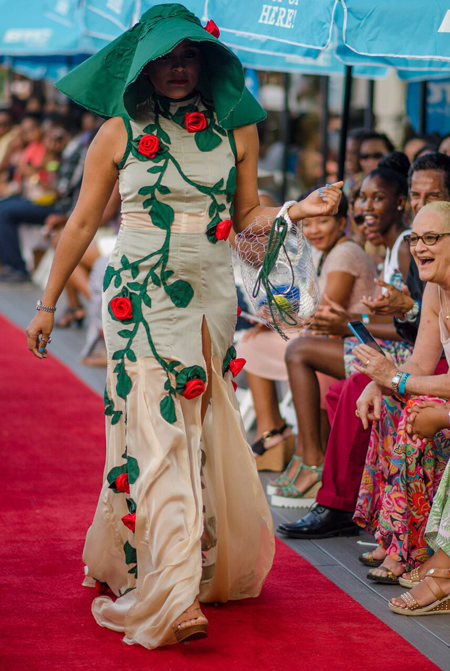 BTVI student Delano Marc made a statement on the runway of the 2016 Miss Bahamas Designer Showcase competition! The garment was modeled by Miss Commonwealth Bahamas 1993, Sayde Francis. The birds she held in her caged purse drew much reaction from the crowd.

Held at the Melia Nassau Beach Resort under the theme, ‘I’m Every Woman,’ scores of fashion enthusiasts and supporters of the 10 Miss Bahamas contestants braved the brutal heat on the Independence Day holiday. And although the designer showcase was the third competition for the afternoon, following the swimwear and top model contests, it was an eclectic collection that was worth the wait.  Whether they are currently enrolled or graduates, the emerging designers dished up a heavy dose of creativity, craftsmanship and originality that silenced any critics.

Commonwealth Fabrics provided each designer with an $80 sponsorship to assist with material and notions. The participants took advantage of the opportunity to showcase their talents, pushing more edgy styles this year. This is the second consecutive year that the Miss Bahamas Organization (MBO) and BTVI have teamed up.  There was a consistent theme of womanhood throughout the showcase with symbols of femininity, yet empowerment, ranging from the sleek and sexy to the bold and fierce, and even playful.

During the showcase, there were several pieces that started out one way, eventually revealing an underlying bang. Who said evening wear had to be full-length gowns?  In a few instances, the BTVI designers unveiled jaw-dropping petite skirts and rompers under capes. They left the audience clamoring for more designs with personality.

By the end of the evening, BTVI graduate, Mrylande Julien broke rank with the traditional evening gown and won the competition. Last year she placed third with a three-piece white ensemble that incorporated pants, layered with a sheer skirt and bustier. This year, what was supposedly an all black one-shoulder piece with an asymmetrical skirt, opened to reveal a peek-a-boo romper with a detachable African print coat that Miss World Paradise Island, Pischia Adderley threw over one shoulder, packing a lot of punch as she strutted.

The audience erupted in applause and Pischia confidently sashayed down the runway. Meanwhile, Mrylande’s victory was a sweet one, having placed third last year.
“I’m delighted.  It validates to me that I am a good designer.  I now know 100%” she exclaimed following the win.

As for the design, Mrylande, who has set a trend of thinking outside of the box, said she knew from the beginning that whatever she created, it had to have the ability to be worn in different ways. Regarding the colour scheme, the black represented the power of women and the print was symbolic of women being queens. The peek-a-boo concept was to show a woman’s sensuality, while the romper was inspired by wonder woman.

Placing second was the design of Janet Cooper, whose cute, island-chic creation was consistent with the floral trend that made a return to the fashion scene in 2015, continuing into this year. With her tiny frame, Miss World Bimini, Bryneeah Gray perfectly fit the beautiful creation, that initially appeared to be a sunshine yellow dress with matching floppy hat and bag, but it turned out to be a cover-up that eventually unveiled a sleek floral mini skirt and sweetheart neckline.

Hopping into the third place spot was a duo: Kirkwood Deal and Keisha Strachan. The team broke rank and pulled off an all-white affair which included a striking pants suit and attached lace cape on the statuesque Miss World Long Island, Ashley Hamilton.  It was a clean-cut piece of clothing construction that was a breath of fresh air.  The lean Ashley wore it well, topped with an edge of sophistication in a top hat embellished with a bow, white gloves and a white cane. She strutted like a professional model and commanded the crowd’s attention. They went wild.

Kirkwood, a second-year fashion student, said that after meeting Ashley he wanted a design to match her personality.

“Ashley is humble, but strong.  I wanted to bring out her strength and thought white would do it.  It’s a nod to Broadway and she worked it. She carried on bad,” he said with a big grin.
Kirkwood added that his confidence level has shot pass cloud nine following his third place finish.

“We, the judges, had a difficult time selecting the top three winners because the pieces were so varied and it was clear that a great deal of thought, creativity and effort went into the construction of the garments,” said Ms. Thompson.

“We, at BTVI, are extremely proud to have participated in the showcase and we trust that the display of talent will attract corporate partners and individual sponsors who have an interest in assisting in our endeavour to further develop our fashion trades department,” she stated.

MBO’s Vice President of Corporate Sponsorship and Media Relations, Jerome Sawyer, said the organization is “extremely pleased” to have had BTVI designers participate.

“We were impressed with the level of design, attention to detail and ingenuity it took to create the outfits within the $80 given,” said Mr. Sawyer.

“The students and faculty were very professional and provided our contestants with a great experience.  We are looking forward to having the winner and runners-up working with the organization to provide pieces for our new queen,” he stated.

The Miss Bahamas beauty pageant will be held July 24th at the Melia Nassau Beach Resort.