Manifest and Joann Callender on TBN 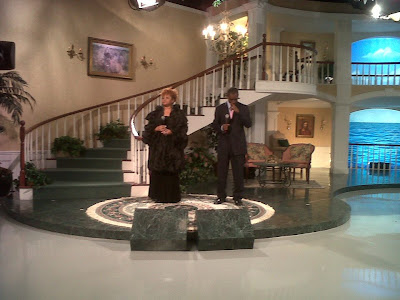 By Arthia Nixon, The Ambassador Agency

FORT PIERCE, FLORIDA… Lavard ‘Manifest’ Parks’ plans for semi-retirement from the hip-hop industry have been placed on hold now that he is about to be seen in at least 190 countries this weekend via the Trinity Broadcasting Network (TBN). The producer, songwriter and hip hopper was there to perform his award-winning ‘hip-hopera’ duet with the Caribbean’s queen of opera, Joann Callender who was a featured guest on the Praise The Lord.

“It was certainly an honor to be on TBN with Joann,” said Manifest. “She is an artist who I respect and have a great deal of appreciation for as it relates to her daring to be different by choosing opera as her genre instead of conforming to what society thinks it means to sound Bahamian or Caribbean.”

Manifest said that he was surprised when he initially got the call that Mrs. Callender wanted to share the stage with him to perform the song they won a Marlin Award for.

“She called me up after receiving the call from TBN,” he reflected. “The show highlighted her as a guest but she still chose to invite me to perform the song in which she sings the chorus for as a featured artist instead of a complete duet. That is true comradeship. Many other artists would have said this my shine time, but she shared it with me, so I pray she will be forever blessed. My family and I are forever grateful.”

“Overall, I am humbled to have been a part of the production and to actually witness firsthand how things are operated in the TBN studios,” he added. “I enjoyed bringing hip hop to the TBN audience and I am glad to have been able to do it at this time.”