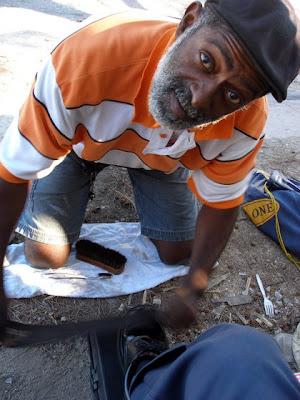 Dr. ShoeShine says that in these hard economic times he is doing anything to make a dollar.

He says he studied under a Chinese shoe shine expert in New York City and that his teacher taught him all the tricks and secrets of the trade, including a secret potion for cleaning suede shoes.

He also says the police harass him sometimes when he works the streets so he has adapted by making office calls by appointment to many business establishments around downtown Nassau.

Well it's an honest way to earn money and I commend him for that.

In this video Dr. ShoeShine explains the difference between working shoes and dancing shoes.