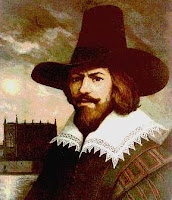 November 5th is known as "Bonfire Night" or "Guy Fawkes Night", and all over Britain people fire off fireworks, light bonfires, and burn effigies of Guy Fawkes. Guido Fawkes was an Englishman who, in popular legend, tried to blow up the Houses of Parliament with barrels of gunpowder. He was caught, imprisoned, tortured on the rack, and finally executed, as we'll see.

400 years ago, Guy Fawkes was a co-conspirator in the "Gunpowder Plot" of 1605 in England. He and his cohorts decided to blow up the both Houses of Parliament in London and kill King James I upon the inaugural opening of the Parliament, and succeeded in smuggling several barrels of gunpowder into the basement of the Parliament.

This "Gunpowder Plot" occurred two years after King James I (of the "King James Bible" fame) ascended to the throne. A group of English Catholics, of which Guido Fawkes was a member, decided to kill the King because it was felt he had reneged on his promises to stop the persecution of Catholics. To this day, it is the law in Britain that a Roman Catholic cannot hold the office of monarch. And the Queen is still Supreme Head of the Church of England.

The plot was foiled at the eleventh hour; some of the plotters escaped, some turned King's Evidence and reported on the rest. The unlucky Fawkes was taken in chains to the Tower of London. He was hanged, drawn and quartered. After Guy was hanged, he was torn asunder and drug through the streets of London behind a horse cart. The charge was treason, though some people in England prefer to remember Guy as "the only man ever to enter Parliament with honourable intentions."

To this day, one of the ceremonies that accompany the opening of a new session of parliament, is the searching of the basement, by a bunch of men in funny hats. Parliament somehow made political capital out of the close call, and poor Guy Fawkes is burned in effigy every November 5th on bonfires all over Britain. They sell a lot of fireworks too, and children beg for money on the streets to buy them. The children usually exhibit the "guy" or dummy that will be put on the fire. "Penny for the guy, mister?" is a common refrain at this time of year.

In the last dozen years or so however, with the pervasiveness of American television and culture in England, the custom of celebrating Halloween is in the ascendancy, and many children are now going for the double treat: candy on October 31, money for November 5.