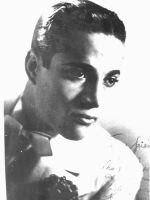 Nowadays when the term "Over the Hill" is used, most people do not necessarily think of a posh, upscale, vibrant, cultural or touristic center where international celebrities once wined and dined.

Those who can remember, however, the music, songs, and glamour still lives on in their souls. An icon during the glory days of Over the Hill was the late dancer and entertainer, Paul Meeres.

Born and raised in the heart of the Grants Town in 1902, Meeres, like many Bahamian males during the early 1900s, went abroad to the United States to worked on what was called "the contract," an employment agreement between U.S. and the Bahamas, to meet its demand for farm workers.

While there, Meers was introduced to the art of dancing which dramatically changed his career. Without formal training, utilizing his natural talent, he developed a smooth dancing style that put him on the international entertainment stage.

During the period in Afro-American history known as the "Harlem Renaissance," he rose like a bust of light in the night sky and became a main feature at New York's, plush Cotton Club in the 1920s. Strikingly handsome, he was regarded as the best looking man in the Bahamas and was nicknamed "The Brown Valentino," a source says.