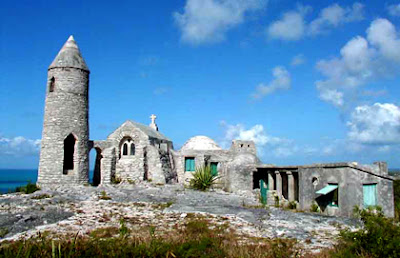 Said to be named after the pirate Arthur Catt, who used to make frequent stops here, Cat Island is located near the Tropic of Cancer, between Eleuthera and Long Island. It has one of the best climates in The Bahamas, with temperatures in the high 60's during the short winters, rising to the mid-80's in summer, with trade winds making the place even more comfortable.

The Hermitage is a bit of an historical oddity, fascinating and strange. The hike up to see this religious site will take visitors through small villages along beautiful trails, full of island flora and fauna. The Hermitage itself is made from the limestone of the cliffs, with each piece painstakingly extracted, shaped and set by hand by the Canadian mule-skinner turned Anglican turned Roman Catholic priest, Father Jerome. The Father built the structure to scale, designed it to fit his rather diminutive form. Beloved by the island people, the priest passed away in 1956 after reaching the ripe age of 80.

Other historical sites on Cat Island include an Arawak cave, found at Columbus point, and plantation ruins, left over from the islands efforts at joining the worlds cotton growers.

The Deveaux plantation in Port Howe was built and owned by Andrew Deveaux Sr., a plantation owner from South Carolina. Andrew Deveaux Jr. of the US Navy, participated in the 1873 battles to get Nassau back from Spain. The Ambrister plantation ruins are in New Bight, adjacent to the trail leading to the Hermitage.

Another well known ruins is the remains of the Ambrister plantation, near Port Howe.